First, let's look at the specific situation of the monthly export volume of the high access Machinery industry from January to December in 2018 (see Table 1). From the perspective of time distribution, it maintains a similar trend as in previous years. In February, due to the Chinese New Year holiday, it had the lowest sales in the whole year. The sales in the second half year were higher than in the first half, the highest sales were in August and September. The percentage of amount in the first half year and the second half are respectively 37.54% and 62.46%. The difference between the rates have a slight increase trend year by year. At the same time, the quantity of sales also have the same characteristics. The peak season of sales of high access Machinery and suspended platform enterprises is mainly concentrated in the second half.

Compared with 2017, we found that although the total export quantity has increased by 10.9%, the total amount of money has increased by 75.2% (See Figure 1 and 2 for details). Above all, the increase of the quantity is lower than the amount of money, so the average price of products has risen. Among them, the sales of suspended platforms was 25.924 million US dollars, accounting for 2.46% of the aerial work machinery industry. 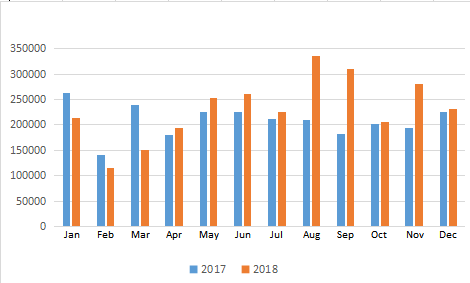 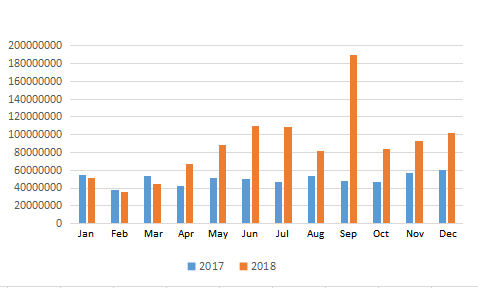 2.The layout of export market

In 2018, China's aerial work machinery was exported to 204 countries and regions. According to the detailed statistics of the export area (see Table 2), the total number of exporting countries ranked in the top 10 accounted for 54.24%, and the amount of money accounted for nearly 39.5%. The United States and Japan are in the top two, South Korea has fallen out of the top ten, and Southeast Asian countries with economic prosperity in recent years accounted for four seats. The suspended platform industry (see Figure 3) is mainly based on the countries in Eastern Europe, South Asia and Southeast Asian. Especially after the Ukrainian war, the market revived and the import volume jumped to the fourth place. Iran, which has been sanctioned by the international economy, has a sluggish economy and a low number of imports, which is in stark contrast to Ukraine. From Figure 4, it can be seen that the sales amount ratio in the Eastern European market is lower than the quantity ratio. The price of the suspended platform export industry in the region has become the lowest, and it has laid a hidden worry for the development of the market. Figure 4: The comparison of sales and quantity of suspended platform’s export

3.The distribution of customs declaration port and transportation methods

From the customs declaration port, the export value of Shanghai, Ningbo, Shenzhen and other six major ports have accounted for more than 75%. Shanghai port has accounted for 35.5%. From the analysis of trade patterns, it is dominated by general trade, which is accounting for 60%. The mode of export transportation is mainly by sea.

4.The performance and situation of China's suspended platform manufacturers